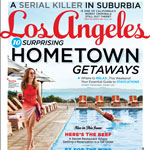 I RECENTLY unearthed a pile of childhood drawings my parents had saved. This particular batch dates to 1976, when I was six years old and enrolled in a summer art class at Hollywood High. My classmates were teenagers, and the assignment, if memory serves, was to create movie posters. I was an avid film fan even then, with a cinematic diet that consisted largely of whatever my older siblings were consuming, which was a lot of R-rated stuff. That explains why my art class portfolio didn’t feature Benji the dog but brutal scenes from Rollerball and The Exorcist. My homage to The Omen would have been rejected by Highlights magazine: With crayons I drew a smiling photographer being decapitated by a flying shard of glass… Read

10 Hometown Getaways
Sometimes you need a nudge to recognize what’s right under your nose. Take a break without even buying an airplane ticket with these staycations, designed for every kind of traveler

In the Footsteps of a Killer
By Michelle McNamara
One of the most violent criminals in California history was never caught—and might still be out there. As an ice-cold case heats up again, one L.A. crime blogger joins the manhunt

The Castle on the Hill
By Ann Herold
It’s the largest Craftsman residence in the United States, built as an immigrant’s Hollywood dream house. Its current owner has spent 25 years quietly reviving all 13,000 square feet of it

The Zen Master of Beef
By David Hochman
The most coveted restaurant reservation in town is at a tiny, no-frills space on Pico Boulevard. Why do diners go to great lengths to get inside? The meat dishes of owner Kaz Oyama

CityThink
Just in time for the election: the ABCs of the city’s government

L.A. Archetype
A location scout who’s a scholar of scenery

How L.A. Works
The power behind wind turbines

The Dine Review
Josef Centeno is back home, focusing on the Tex-Mex flavors of his childhood at Bar Amá.Patric Kuh crosses the border with him

Culture Files
Writer Marisa Silver finds a novel in a vintage photo; an L.A. label signs on to the gender-bending sounds of Rhye; Vicente Fernández says good-bye; and scenes from the front lines come to the Annenberg plus: Breaking up is fun to do at Ex(it) Wounds

The Guide
What to do this month, from testifying with the Harlem Gospel Choir to putting soles on the street for the marathon