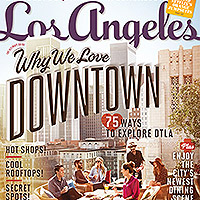 I attend the occasional Shabbat service and observe Jewish holidays at our local temple. I didn’t convert when I married, but it’s been important to me to raise my son in traditions that remain meaningful to my husband. Organized religion isn’t exactly in my DNA (which isn’t to say I’m not spiritual)… Read

We Love DTLA
Edited By Nancy Miller
There’s more to explore than ever before in L.A.’s fastest-growing neighborhood. Here are the places to eat, drink, shop, and discover now

The New Age of Marianne Williamson
By Monica Corcoran Harel
In the early ’90s, she was the city’s most famous spiritual teacher. Can she win a seat in Congress?

Finding Schindler
By Ann Herold
Architect Steven Ehrlich stumbled on the forgotten work by the midcentury master in Inglewood. Now daughter Onna and her family are calling it home

L.A. Archetype
A polo player on achieving his goals

L.A. Story
Orange Is the New Black’s Jenji Kohan on her lucky breaks and cleaning up MacArthur Park

The Seen
The stars who’ve transformed their style

In Store
Holy spokes! We’ve found a host of doodads and add-ons to spruce up your bike, from woven baskets and leather handlebar bags to bells and grips

Style Stakeout
When it comes to fashion—whether urban, vintage, or designer—it’s whatever floats your boat in Long Beach

Dining Out
142 of the city’s best restaurants, from the Factory Kitchen to Farmshop

Culture Files
Second time’s the charm for the city’s art biennial, Made in L.A.; the L.A. Film Fest ups its street cred; French Stewart puts on his best Stoneface plus: How to do the Hollywood Bowl

The Guide
30 things to do in June, from a pedal-powered tour of the L.A. River to a tribute to Art Clokey’s green guy

CUT!
By Logan Hill
When an actress becomes pregnant, Hollywood has its tricks—digital and otherwise