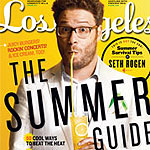 Those who know me best have always called me an “old soul.” As a child I was most comfortable around the classmates of my older siblings; as a teenager I was hard-pressed to choose between listening to Glenn Miller or the Go-Go’s. My closest friends from my college years aren’t from college at all, but instead are the seasoned editors and sales reps I fell in with while working part-time at the LA Weekly. When I started writing lengthy profiles in my early twenties… Read

Summer in L.A.
Edited by Nancy Miller
Master your backyard grill, stake out the perfect beach spot, and—with some help from comedian Seth Rogen—make this season the coolest one yet

Freeway Rick is Dreaming
By Jesse Katz
L.A.’s notorious crack kingpin will not be denied. Ready to score yet again, he’s giving the people what they want, only this time he’s keeping it on the up-and-up

WEB EXTRA: Read a Q&A With Jesse Katz about “Freeway Rick is Dreaming”

All the President’s Man
By Ann Herold
GOP strategist Frank Luntz has spent a lifetime collecting artifacts honoring the Founding Fathers and other heroes. They’re on display at his Brentwood home

CityThink
A district attorney makes history; Ed Hardy reclaims his name; The Bling Ring illuminates old stereotypes; and Angelenos count off their “secrets” PLUS: A chip off the old gambling ship

How L.A. Works
The return of Echo Park Lake

Au Courant
These are not your ’80s jelly shoes

Trend Report
The jumpsuit leaps back into the competition

Best of L.A.
Luggage shops that are worth the trek

The Guide
What to do in June, from pedaling with CicLAvia to prowling at the zoo

The End is Nigh