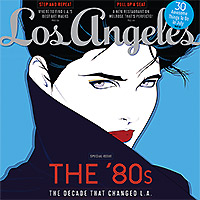 As editor-in-chief, I always hope that every issue of this magazine will eventually become an artifact. This month we explore how the 1980s fundamentally changed L.A. For inspiration I flipped through the 120 issues from that decade in our archive. Karma Chameleon, those magazines were huge! If our job is to reflect the city back to itself, you could learn a lot about the L.A. zeitgeist from the covers alone. A few takeaways… Read

The ’80s: The Decade That Changed L.A.
Edited by Nancy Miller and Mary Melton
It was the era of the go-go’s and n.w.a, when colors were bright, hair was big, and fernando-mania was in the air. With the help of movies, music, and something called the 1984 Summer Olympics, the city and its fashions became the center of the universe. grab your swatch—we’re going to travel through time

CityThink
Buckling up for LAX’s takeoff; when Denny’s was just a Lakewood doughnut shop; test your knowledge of Donald Sterling; the historian who was seduced by Southern California; downtown’s big-screen dystopia

L.A. Archetype
A sustainable butcher who’s a cut above

The Seen
What actors are really like on the party circuit

How to Dress in L.A.
Go straight from the beach to the bar in these stylish cover-ups

The DIY guide
How to set up your own home bar

The Dine Review
Patric Kuh on the Iberian heights of Perfecto Rocher’s smoke.oil.salt

Dining Out
143 of the city’s best restaurants, from Faith & Flower to Tar & Roses

Culture Files
The World Cup taps into soccer’s L.A. fan base; MOCA’s new director goes on the record; Chris Isaak at the Bowl plus: How to do the Annenberg Community Beach House

Best of L.A.
Strolling the city’s most eye-catching art walks

The Guide
30 things to do in July, from fancy fireworks to an exhibition of motorcycle-themed art

TV
By Steve Erickson
Father, son, and the holy mess of Hollywood on Showtime’s Ray Donovan