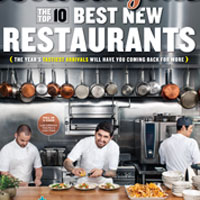 When I’m traveling and I tell someone I’m from L.A., I brace myself for the inevitable question: “Aren’t you afraid of earthquakes?” Of course I am. When you’re nice and cozy beneath the covers and suddenly your bed frame shakes you awake and you’re re-creating a scene from The Exorcist, it’s freaking terrifying. The reality is, we live on all kinds of active fault lines. Eventually they’re going to give… Read

Best New Restaurants
By Patric Kuh
From killer Tex-Mex to Italian-tinged Japanese to carnivore-worthy vegan, the hottest plates in town

WEB EXTRA: An Insider’s Guide to the Best New Restaurants

The Secret Life of Johnny Lewis
By Bill Jensen
What made a promising Hollywood actor commit murder?

Like A Punch
By Ed Leibowitz
Richard Andrews, who headed the state Office of Emergency Services, reflects on the Northridge quake

One Sheet Wonder
By Amy Wallace
You may not know Drew Struzan’s name, but if you love movies (and movie posters), you know his work

CityThink
A movie palace’s new life as the latest Ace Hotel; Steve Soboroff on cops; the truth about totes; the five stages of parking grief

How L.A. Works
Structural secrets behind the Watts Towers

In Store
Denim goes off road with a nod to motocross

The Luxe Life
Andrea Stanford, VP of merchandising at One Kings Lane, shares what’s in her cart

Best of LA
We pick the top vintage shops by decade

Culture Files
Kaz Oshiro brings his art to the classroom; Dum Dum Girls cast a long shadow; how to do the Forum in Inglewood PLUS: Patton Oswalt on the decline of hecklers

The Guide
What to do in January, from feasting on indie films to welcoming the Year of the Horse

Urban Affairs
By Fiona NG
Why Chinese nationals are traveling to the L.A. area to give birth

Well-Being
By Ben Kallen
Juicing up with testosterone supplements

The Weekend Longread: An In-Depth Look at “Birth Tourism” in L.A.

Of Sons and Guns

The Secret Life of Johnny Lewis