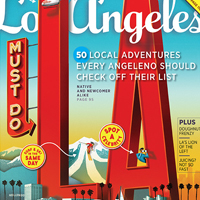 I don’t spend much time at sea—like, practically none—but I am an explorer. A few years ago, while driving back from a dinner at the old-school Dal Rae steak house in Pico Rivera, I pointed to the Commerce Casino and said to my husband, “We gotta go there at least once, right?”… Read

Must-Do L.A.
Edited by Nancy Miller
Ever hiked to the Hollywood sign? Made it into the Magic Castle? Check out our list of 50 local adventures every Angeleno should try, whether you’re a wide-eyed newcomer or total local

When the World Goes Dark
By Susan Salter Reynolds
Kem Nunn went from itinerant surfer to cultural sage with his 1984 novel, Tapping the Source. In his new crime thriller, Chance, he taps into society’s elevated anxiety

Of Sons and Guns
By Sue McCullough
Last November a lone gunman with an anti-TSA bent brought bedlam to Los Angeles International Airport’s Terminal 3. McCullough was there with her 12-year-old son. This is their story

Can You Dig It?
By Ed Leibowitz
As hard news Web sites go, L.A.-based Truthdig doesn’t look flashy, but its content has a way of grabbing attention. Time will tell if its founders can be as aggressive about keeping it funded

CityThink
Looking back at 100 years of Beverly Hills history; BuzzFeed’s Doree Shafrir on covering L.A.; the not-so-innocent maiden of masa; a map for dealing with warm-weather guilt

L.A. Archetype
The secret life of a beekeeper

The Seen
Celebs who should be singing for their supper

Au Courant
L.A. style sails into the mystic with a cosmic blend of rainbows, talismans, and celestial prints

WEB EXTRA: Remembering the psychedelic shops of the ’60s

Best of LA
Take-out soups that soothe body and soul

Culture Files
LACMA glorifies the “beautiful game”; writer Attica Locke on the Great Migration; how to do the new Wallis Annenberg Center for the Performing Arts PLUS: KCRW’s Anne Litt on what’s caught her ear

The Guide
What to do in February, from getting a gander at the Golden Dragon Parade to getting down with James Brown

The Weekender
Attractions timeless and new in Mexico City

Business
By Cord Jefferson
How Lyft, Sidecar, Uber, and other app-based car services are changing the way Angelenos get around

Valentine’s Day: Gifts for the Food Lover in Your Life

Regrets, I Have a Few