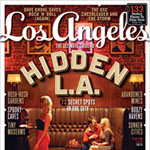 THIS MONTH Dave Grohl, front man of the Foo Fighters (and object of a few crushes around our office), is releasing a documentary he directed about Sound City Studios in Van Nuys. Tracks to some of the most popular rock albums of all time were laid down behind the recording studio’s cinder-block walls, from Fleetwood Mac’s Rumours to Tom Petty’s Damn the Torpedoes to Nirvana’s Nevermind. When Grohl, who was a drummer for Nirvana, heard that the studio was possibly shutting down last year, he bought Sound City’s legendary Neve 8028 recording console, moved it to his own studio, and filmed a love letter to the Valley landmark… Read

What’s Hiding in L.A.
Edited by Matthew Segal
The city doesn’t reveal its secrets willingly. We’ve dug up dozens of surprises just waiting to be discovered, from a pub within a pub to nifty museums to lesser-known treasures from the city’s buried past

WEB EXTRA: All About–And Where To FInd–LA Mag’s Geocache!

The USC Song Girl and the Sea
By Matt White
When Hurricane Sandy heaved the crew of the tall ship Bounty into the Atlantic, a chapter closed in an L.A. love story

CityThink
Charlie Sheen makes a comeback plus: The Oscar stats that matter

How L.A. Works
What makes the lights so bright at LAX

In Store
Flavie and Clayton Webster, the designing duo behind Cerre, invite us inside their Melrose Place atelier. Plus: Wool that doesn’t itch or pill

Tastemaker
Who is Oliver Peoples? The founder of the famed eyewear company gives us his back story and inspirations

Best Of L.A.
The city’s freshest new bakeries, hot out of the oven

Dine Review
The Sunset Strip has seen its fair share of meat markets, but never one as graceful as Gorge

Culture Files
Artist Llyn Foulkes finally gets his due; spring has sprung with the return of a classic ballet; a Mali guitar sensation wants to take on the world

The Guide
What to do this month, from cheering on the bulls to dressing up for an Edwardian ball

Film
By Steve Erickson
Even in a year of strong female leads, Jennifer Lawrence stands apart. Plus: Who should really win at the Dolby Theatre

Well-Being
By Andrea Richards
Delivering a baby the old-fashioned way has become a fading art. Should we be worried?