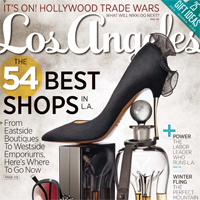 The movie business has faced challenges since the moment D.W. Griffith unfolded his director’s chair downtown in1913. Television was supposed to kill it off, then Betamax tapes and video games. None did, but the way we consume media (think binge watching) has taken its toll on the bottom line… Read

Pulp Friction
By Patrick Goldstein
When it comes to Hollywood news, there have never been so many competing outlets. Or such drama

WEB EXTRA: Labor Studies: A Q&A With Hillel Aron about “The Wage Warrior”

CityThink
The story behind the selling of Mary Poppins; the colonel who’s freeing the L.A. River; a new TV series returns the city to its mobster past

L.A. Archetype
A museum guard steps away from the artwork

How L.A. Works
The Grove’s fountain makes a splash

Holiday Gift Guide
At a loss for what to buy the rugged mountain man in your life? No clue as to what will please a budding audiophile? Still coming up short for the woman who’s got it all? Our roundup of last-minute ideas covers presents for everyone on your list—no matter their personal style

Small Bites
Cocktails that warm a room; assembling a timpano step by step; gifts for gourmets PLUS: Josef Centeno gets elaborate at Orsa & Winston, and new restaurants Hakkasan, Rao’s, and Zo

The Dine Review
Ricardo Zarate’s Paiche may have plenty of pluses, but Patric Kuh finds that not everything there adds up in a meal

Culture Files
The divine Bette Midler plays Hollywood dynamo Sue Mengers; Mortified shares the shame; how to do Olvera Street PLUS: Margaret Cho is her mother

Weekender
Striking gold on the slopes of Breckenridge

The Guide
What to do in December, from making soba to touring Dorothy Parker’s L.A.

Film
By Steve Erickson
Choosing between Meryl Streep, Judi Dench, and the pair from Blue Is the Warmest Color

Well-Being
By Andrea Richards
For dieters, cheat days offer a tasty reward after so much self-denial

Gifts to Devour: Locally Sourced Items For Your Favorite Foodie