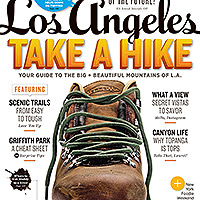 One recent Saturday afternoon, my nine-year-old son, Isaac, pointed out the car window to the Verdugo Mountains and asked, his voice high-pitched and eager, “How tall are those radio towers up there?” “I don’t know,” I answered. “We’d better find out.”… Read

A Field Guide to the Mountains of L.A.
Edited by Matthew Segal
From parks to hikes to picnic spots to bike rides, a celebration of vertical wonders

The Hugo Problem
By Mona Gable
Professor Hugo Schwyzer crafted his persona as a male feminist. Then, in a flurry of tweets, it went up in flames

CityThink
Religious diversity along L.A.’s “miracle miles”; Ted Lieu’s march on Washington; debunking some driving myths; why a few Angelenos walk on the wild side

The Seen
Who’s best at ducking the cameras

In Store
The BFFs of jeans brand Current/Elliott turned their fascination with denim into a book; The Selby pays tribute to the sister design team behind downtown’s Building Block; four ensembles for standing out at Coachella

Best of L.A.
Get a whiff of this: The city’s top perfume boutiques offer everything from custom fragrances to hand-blended oils and exotic imports

Small Bites
School children know their kale from their Brussels sprouts and how to grow them; top L.A. chefs set up shop in Asia; native son Colman Andrews table-hops around the world in his memoir PLUS: Chloe Tron goes beyond pho with her latest East Borough, and new restaurants Gracias Madre, L.A. Chapter, and Roadhouse LA.

The Dine Review
Patric Kuh on the impressive debuts of Maude and Orsa & Winston, where tasting menus are front and center

Dining Out
140 of the city’s best restaurants, from Allumette to Zo

Culture Files
The late artist Mike Kelley gets a retrospective; author Michelle Huneven shares her inspirations; Alfred Molina hits the stage plus: How to Do Universal Studios

Weekender
Taking a few bites out of the Big Apple

The Guide
30 things to do in April, from Dodgers opening day to an egg hunt

Open City
By Anne Taylor Fleming
You wouldn’t know it from all the green out there, but the drought has taken its toll in our own backyard

Film
By Steve Erickson
The first stab at putting Dune on film was a mythic disaster, but one that changed film history

Well-Being
By Andrea Richards
For Angelenos who fear developing Alzheimer’s, there are reasons to hold out hope