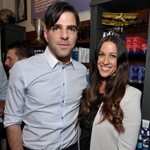 For the last few years Kiehls has given a big check (literally, one of those large cardboard ones – followed by a real one) to a worthy green cause each Earth Day. Yeah, yeah, bravo. Well done. More importantly, they throw a hoppin’ party at the store on Montana Ave to highlight this fact. As store parties go, it is definitely worth pushing through the mass of people to stop by. The two cops outside the door meant someone fun (aka famous) was inside and when I walked in I bumped into Alanis Morissette right off the bat. She’s growing her hair back out but it’s a far cry from her 90’s ‘do. AND speaking of ‘do’s there was Zachary Quinto in the process of growing out his Spock-cut. Both were there as they contributed designs for the packaging for Kiehl’s Limited Edition Ultra Facial Cream—100% of the sales of which go to the org Recycle Across America. Who else did I spy? Anthony Mackie, Amy Smart, Wilmer Valderrama and this party’s perennial – Gilles Marini.

Kiehls Prez Chris Hedlund noted, “Kiehls has been around since 1851. I’m not 162. We make product and we want to make sure they are recycled.” Then the noise level went back up, more truffle fries were consumed from STK LA and there was some serious pick-up action going on around Soy Milk Honey Whipped Body Butter. Despite a photographer taking a picture of everyone taking a cupcake, I managed three. I’m a pro. (check out my Twitter pic: @karimozena)

Satisfy Your Sweet Tooth at These 9 Black-Owned Bakeries