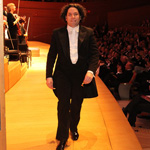 “It’s nice not to be the biggest player here,” Helen Hunt’s hubby Mathew Carnahan whispered to her as they followed the crowd into the chandeliered tent at the LA Phil’s 10th Anniversary Gala. “Yea,” Hunt agreed. “I’m like … the jester.” The men and women of the hour were Disney Hall architect Frank Gehry, LA Phil music director Gustavo Dudamel, LA Phil president and CEO Deborah Borda and cellist Yo-Yo Ma, plus the whole Los Angeles Philharmonic. While the orchestra performed, a video installation by Netia Jones played—it included quotes read by Gehry and artistic montages of the negative press Disney Hall received in its early days and the praise for the project that followed. The whole to-do was like a a happy Frank Gehry “screw you” to the naysayers. Apparently, playing music coordinated with a screen behind them was The Dude’s idea. At dinner afterwards, Dudamel said, “We have the best Board. You are crazy because you believe everything I say.”

I remember when I first saw Disney Hall. I was standing across the street during an Opera intermission. I thought it looked like a crushed Pepsi can. It grew on me (and apparently everyone else) and is the best place to listen to music. On this night the program started with a Warhol-ian moment as Dudamel wanted to show off the Hall’s acoustics and played John Cage’s 4’33’’, which is essentially silence for that period of time (the better to hear the ambience sounds in the hall). It turned into a symphony of coughs, really, and you could even feel guests trying desperately not to hack during the absence of sound. I got misty-eyed when they fired up the pipe organ and again when shiny silver stars (Stamped with 10th’s for the venue’s anniversary) began falling from the ceiling during “When You Wish Upon A Star.” Dudamel reached down to scoop up one as a souvenir as he exited the stage after the last piece. All night the stars, which stuck to tuxes and evening gowns, fell off guests like Mayor Eric Garcetti, his doppelganger actor Ty Burrell, Jane Fonda, Dame Julie Andrews (sitting in her usual spot during the concert), Burt Bacharach, William Shatner, Emmy Rossum, Albert Brooks , Eli and Edye Broad, and Ben Harper (among many others). The gala co-chairs were Joan Hotchkis and Alyce Williamson. Chef Joachim Splichal, having just recovered from serving about 3,000 folks at the Emmy Governor’s Ball, created a fantastic menu (black olive crusted lamb and roman polenta cakes, caramelized chocolate pudding , etc), and proceeds from the evening benefitted the LA Phil and it’s education programs like YOLA (Youth Orchestra LA). I hopped the escalator to the valet leaving Jane Fonda tip-tip-tapping on her phone by the exit.