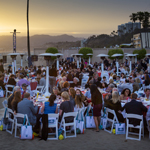 Heal the Bay’s BRING BACK THE BEACH to-do was held on the sand in front of the Jonathan Beach Club in Santa Monica. I am still smiling thinking of sitting there for dinner at a table on the beach as my chair sunk in and the table hit me about a foot below my chin. It felt like I was three years old and needed to sit on a few phone books. At least I didn’t drop any five spice-rubbed Mary’s Farm chicken breast on my lap. I like this function because I tend to be messy (but am closer to the table here) and because folks have a drink or two. It’s probably also the only time I will ever be let into the Jonathan Beach Club. Heal The Bay is a fine org that has been cleaning up the ocean (especially Santa Monica Bay) for the last 30 years. Those folks with the trash bags picking up litter on the beach among other things? That’s them.

Last year the group honored Julia Roberts—who almost wasn’t let into the private club for the party. She had to talk her way in with girls who didn’t recognize her at the front desk. This year the honorees included Jeremy Irons (sadly a no show), Dr. Howard Murad (skincare doc extraordinaire) and Heal The Bay do-gooder and the org’s first paid employee—Mark Gold. I was sorry Irons couldn’t attend. He narrated a fantastic spoof documentary called The Majestic Plastic Bag. The festivities went on long after sunset and Ziggy Marley and co. played into the night. Why else am I still smiling? Because someone actually got onstage and announced that “the person with the Prius, you’ve left your lights on.” A few people started to get up before they realized it was a joke.