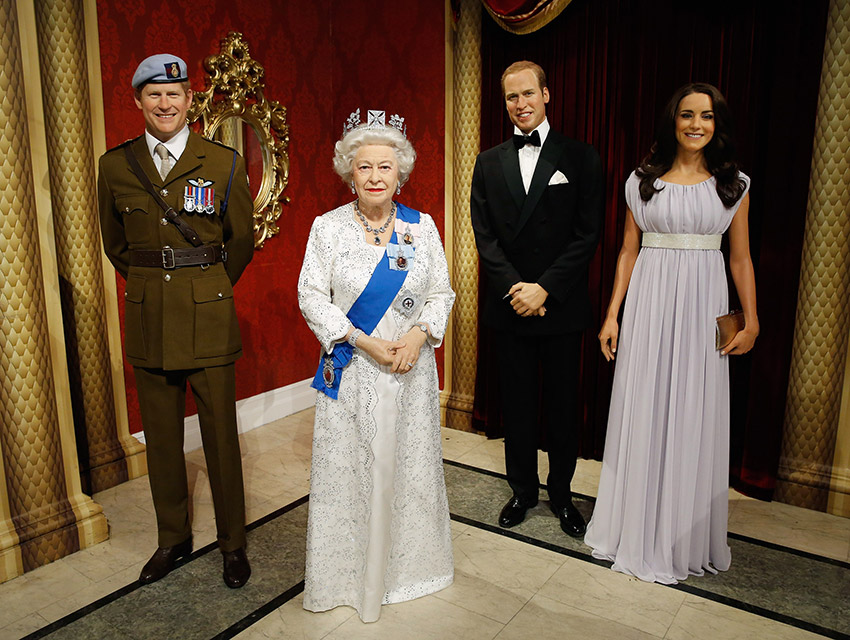 At 9:30 a.m. Pacific Time today, Queen Elizabeth II became the longest reigning British monarch…ever. This morning, her Majesty beat the record set by her great-great grandmother Queen Victoria, whose reign clocked in at 63 years and 7 months. To celebrate this milestone, Madame Tussauds Hollywood welcomes a traveling exhibition to the wax museum that features the Queen and the Royal Family—Prince William, Prince Harry, and Princess Kate. The Queen’s figure is wearing a replica of the dress she wears in her official Diamond Jubilee portrait. We reached out to Tussaud’s studio team in London, who told us via email about the model Queen. “There have been eight different sculpts of the Queen during her lifetime: the first was when she was three years old on a rocking horse,” they said. “Madame Tussauds has always been very protective of the image and likeness of the Royal Family across the estate and hold our relationship with them in the highest regard. It’s a relationship which stems back to 1810, when Madame Tussaud herself conducted a sitting with King George III to celebrate the King’s Golden Jubilee.”

Hey L.A. royal watchers, does Kate Middleton’s dress look familiar? That is because it is an exact copy of the Alexander McQueen gown she wore to the BAFTA Brits to Watch Awards in Los Angeles when she and William visited in 2011. Having met them on that trip, I can definitely say they were very well-mannered, albeit a tad more animated.

Let’s All Stop and Praise Sapphires