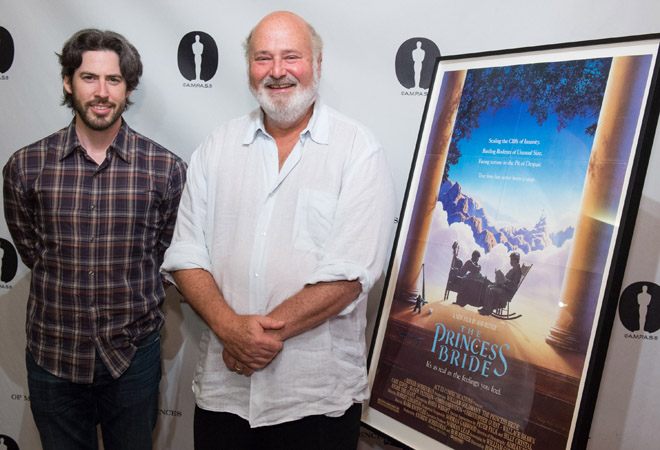 “How weird was that!? It was like having Rob Reiner in your living room,” said one of the attendees of the Academy’s screening of a new print of The Princess Bride with live commentary from the film’s director Rob Reiner (with help from another director—Jason Reitman). He meant “weird” like finding a $100 bill stuck to the bottom of your shoe—the guy was grinning ear to ear. I learned a few things while Reiner and Reitman (both the sons of directors themselves) chatted while the film rolled. Reitman joked, “If you came to watch The Princess Bride completely uninterrupted, you should leave now”…

*Reiner said that Mandy Patinkin (who played Spanish swordsman Inigo Montoya) is asked once a day by a fan to utter the line, “Hello, my name is Inigo Montoya, you killed my father, prepare to die.” Reiner also had a scary moment in New York when one of John Gotti’s crew hollered, “You killed my father, prepare to die!” at him outside of a restaurant (before adding, “I love your movie!”). “I almost went,” Reiner said.

*The film introduced Robin Wright to the big screen (she had only been in the TV soap Santa Barbara at that point). Her first scene was being set on fire in the fire swamp.

*One of the R.O.U.S.s (Rodents Of Unusual Size), which were little people in rat costumes, had to be bailed out of jail before his big scene in the fire swamp because he had been arrested in the night.

*Christopher Guest (who played Count Tyrone Rugen, a.k.a. “the six-fingered man”) is a longtime Reiner family friend. Apparently he disappears so far into characters that Reiner forgot Guest was in the film. At the cast party, Reiner thought it was terrific that Guest came out to support the movie before remembering…he was in it.

*The Army of Floren? Consisted of seven guys.

*This is Spinal Tap fans: check out the wall behind the bed in young Fred Savage’s room. Recognize the hat? Reiner wore it in the movie as documentary filmmaker Marty DiBergi.