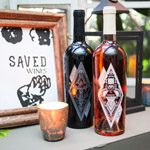 About 10 p.m. Tuesday night I found my eyes riveted on the door of Bungalow One at the Chateau Marmont. Every time a motorcycle pulled up the black brick driveway I expected Johnny Depp to walk through the door of the SAVED wines fete where I had parked on the couch in front of the fireplace. No, there was no bearskin rug and I was NOT dreaming. Johnny Depp and Matt Damon were both on the Confirmed Tip Sheet (party-girl journo speak for WHO is coming to the party) for Brooklyn tattooist/artist Scott Campbell’s wine launch that he was throwing with bride (June) Lake Bell. I was also excited to “run” into Matt and Lucy Damon who have reportedly purchased a home in the Palisades to get a little scoop. The Damons are sweet in person, smooching often when they think no one (I can’t help it – it’s, like, my job) is watching. But they decided to make-out elsewhere.

But a funny thing happened while I waited and party people like photographer Terry Richardson, E!’s George Kotsiopoulos and Liz Goldwyn mingled. I kept sipping Campbell and partner Clay Brock’s (Paso Robles wine maker) rosé (they also have a red) which are available online. And it was very fine. Fresh and crisp. While I’m drinking and telling, another celeb-u-wine worth a taste is Drew Barrymore’s Pinot Grigio. So, smell ya later J-Depp. And Damon, I’ll see plenty of you during award season.