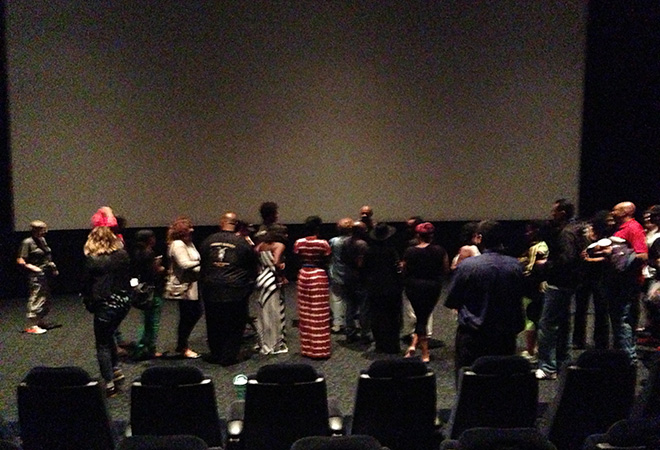 Townsend greeting fans after the movie

The audience was already laughing before the second word (“Tommy!”) uttered in Robert Townsend’s hilarious movie Hollywood Shuffle, which Los Angeles magazine screened at the ArcLight Cinemas last night. The flick was the first in a film series celebrating the magazine’s July ode to the 1980s. (Pick up a copy on newsstands or order one online to catch an interview with both Townsend and Barbershop director Tim Story).

On Tuesday, Townsend and his two daughters watched his satire about a young black actor trying to make it in the entertainment industry. The writer/director introduced the film and stayed afterward for a Q&A and to interact with fans, signing copies of our July issue and posing for snaps.

Townsend talked about the lore (that Samuel Goldwyn helped him create) around the film: “I asked him, can I get that check tomorrow? And he said, ‘You charged the film on your credit card?’ And I’m like, yeah. I didn’t want to tell anybody because I thought people would think the movie was cheap. He said, ‘No, no. That’s really creative on your part—let’s tell the whole world.’ It became part of the legend behind the film.”

And in the let’s-hope-it-happens-soon category, Townsend talked about the possibility of doing a one-man show a la Billy Crystal (700 Sundays): “The thing is—I have some stories that are not to be believed. I got a call from Frank Sinatra. Frank Sinatra called because he loved the First Heartbeats and invited me to his 77th birthday party…” Okay, you just have to believe me that the story that followed is stage-worthy.

The line that formed up by the screen after the Q&A included Kevin Michael Richardson (Fox’s The Cleveland Show), who credited Townsend for inspiring him to pursue his career. Next flick on the menu? Pay to see some underpants with Farmer Ted. It’s Sixteen Candles on July 7th.