Home Awards Watch The Screen Actors Guild Awards: From the Red Carpet to the Party... 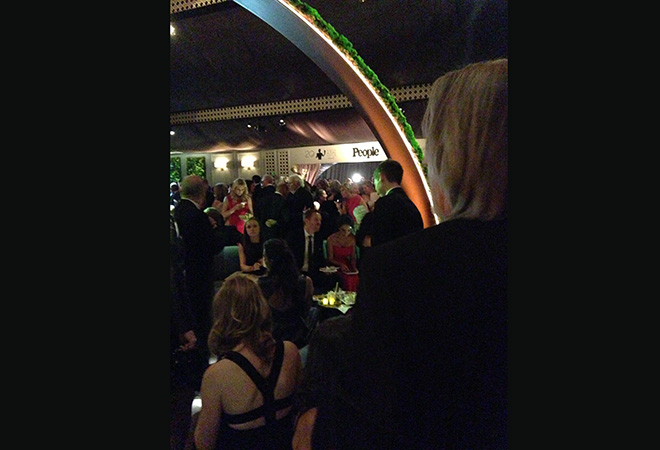 Backstage at the Shrine is always excited chaos during and after the public therapy session known as the Screen Actors Guild Awards. The big winners of the year were Lupita Nyong’o (soft ‘g’, she finally told me), Jared Leto, Modern Family, American Hustle, Cate Blanchett, and Matthew McConaughey, among many others in the film and TV biz. Here’s what was shakin’ from the end of the red carpet (Ben Affleck and Jeremy Irons stopping for smokes) to People/EIF’s fabu after-party:

Jared Leto popped backstage to say he found the voice of his Dallas Buyer’s Club character by “working with transgendered people.”

Lupita Nyong’o says she “Doesn’t feel pressure” to be a fashion plate. “My first love is acting. I never want it to overtake my acting.” She looked remarkable as did Helen Mirren in Escada and Jennifer Lawrence in a Dior number that kept changing color before your eyes. Julia Louis Dreyfus lamented the past: “You used to just go and buy a dress. No one does that anymore.” Except Rita Moreno, who mentioned she bought her Herve Leger coat and Roberto Cavalli dress.

Michael Douglas stopped by with his prize and said about Behind The Candelabra: “There was one particular sexual act where we just did one take. Steven Soderbergh put down the camera and said, ‘I have no notes.’”

Cate Blanchett got to singing her favorite Beatles song in the press room (which is When I’m Sixty-Four). Nice voice. Matthew McConaughey was next up and talked about the weight loss and simple pleasures: “I didn’t go to my favorite steakhouse. I found tapioca pudding. I’d eat it with a tiny little antique sugar spoon. It took an hour.”

Then you followed the pounding music to People/EIF’s after-party on the other side of the ballroom. The cast of Homeland was getting into the music and you had to give Rupert Friend a lot of room for his dance moves. I spied David O’Russell dance-walking across the room, passing Matthew McConaughey who was trapped at the bar by well-wishers. Bruce and Laura Dern popped by for some Wolfgang Puck vittles and I ended up leaving at the same time as Peter Dinklage, who couldn’t walk two feet without someone telling him he was their favorite character on Game Of Thrones.

And then they rested. Next stop on the movie award train? The Academy Awards on March 2nd. All aboard!