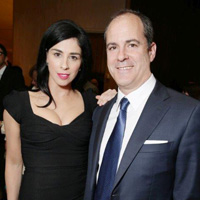 One of the best excuses I’ve ever heard for being MIA at a party you were involved in organizing came from engineer/millionaire Dennis Tito. He had a bash at his manse years ago and missed it because he was in space, rocketing up to the International Space Station as one of the world’s first space tourists (he ponied up about $20 million for the ride).

I’ve now heard an excuse that ranks right up there. Last night Haim and Cheryl Saban missed the Friends of the Saban Community Clinic Gala because they were hosting a fund-raiser at their home for President Obama. The irony? The President is staying at the Beverly Hilton where the gala was held.

They all missed a fun bash (and one that raised $1.3 million before the doors even opened). Once party-goers made it past the Presidential street closures and ample security, they were treated to stand-up by Sarah Silverman (she killed even though she read her set from her phone) and music by The Fray. The band didn’t just phone it in; lead singer Isaac Slade was chatty with the crowd and knew all about the free clinic. He even got the suits off their chairs and swaying by saying, “Can you guys stand up? It’s a little conference roomy in here.” I sat by Jimmy Smits, who jumped a low wall (as did others at our packed table) to chat with the Industry suits. He too knew all about the clinic, which has been around since 1967.

Who else made it past security to fill the International Ballroom? A lot of Showtime folks (network prez David Nevins was the beau of the ball) including: Don Cheadle, Kristen Bell, Bill Macy, Emmy Rossum (she says Shameless is getting dark this year), Beau Bridges (he raved about the writing on Masters of Sex), Lizzy Caplan, Pooch Hall, Paula Malcomson (who mentioned they’d better do love scenes in the dark as they start Ray Donovan, as she isn’t in shape but Liev Schreiber is), Dash Mihok and loads of other execs. A special nod goes to the hardest working mayor in showbiz, Eric Garcetti, who dashed from the Saban’s home to make it to the Hilton just in time to give old pal Nevins an award. “The most punctual public official I have ever known,” said Nevins of Garcetti “I cannot tell you what it is to have my friend of 20 years, who is now mayor, give me this award.”

My apologies to the military-type fellas I ran into leaving out the wrong door as I left the bash (I’m a little too familiar with the hotel). The upshot? Getting stuck on the corner of Wilshire and Santa Monica with all the other people that don’t park at the busy Hilton while President Obama’s motorcade drove past. None of us were too cool for school and waved like idiots.

Joe Biden Just Brought in $4.5 Million with the Help of a Hollywood Mogul