Home Awards Watch The Oscars: Think the Show Was Good? Backstage Was Even Better 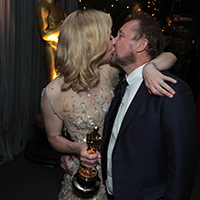 The Oscars this year were… refreshing. My favorite one yet. Everyone and their mother was there (seriously, everyone brought Ma as a date). Backstage, Jared Leto kicked things off after his Best Supporting Actor win for Dallas Buyers Club by asking the press corps, “Does anyone want to try [the statue] on for size—fondle it?” Well, yes, actually. I was in my usual spot—front row to the right of the stage—and copped a feel. Leto continued, “I live just a mile away if anyone wants to hang out later.”

Catherine Martin popped backstage to chat about where she was going to put this latest Oscar (Best Costume Design for The Great Gatsby). “We [she and husband Baz Luhrmann] have a room in our house called ‘The Red Room’ because it’s red. It’s where we put all our memorabilia.”

Lupita Nyong’o said something I’m sure most of us think at one time or another: “It’s not real until you hear Christoph Waltz say your name.” She was referring, of course, to when he read her name for Best Supporting Actress for her role in 12 Years a Slave. “I feel like Willy Wonka in the chocolate factory,” she continued.

The fun continued backstage when Kristen Anderson-Lopez, who won Best Song for “Let It Go” (Frozen), presented her co-winner/writing partner/husband Robert Lopez with a pasta necklace that spelled out EGOT as he has now has all four major awards. Sweet.

Spike Jonze stopped in after winning Best Screenplay for Her to say, “I don’t think I could have written a screenplay when I was younger.” He still looks pretty baby-faced to me.

Best Actor Matthew McConaughey (Dallas Buyers Club) wondered aloud whether the latest episode of True Detective was on as he was speaking. The HBO show is so good that a few of us whimpered for him not to offer any spoilers. “I don’t know what happened,” he said. “OK, maybe I do.”

Then it was up, up, up the escalators to the top level of Hollywood and Highland for the Governors Ball. The walls were covered in greenery and flowers, and I walked in with a smiling Chiwetel Ejiofor.

There was a mishap at the engraving station; all went well for Jared Leto as he got his name etched on his trophy, but when Dallas Buyers Club Best Makeup winner Robin Matthews got up in her poofy dress (she had trouble with it all night—you probably saw her pulling it up onstage), she Jennifer Lawrence’d it…hard. She tripped and hit the floor with enough impact that I thought I heard the sound of Oscar cracking. As we helped her back up, the sturdy trophy was still in one piece, and so was she. Whew!

Gabourey “Gabby” Sidibe introduced John Legend, who actually got the crowd quieted down while he sang, and David O. Russell didn’t seem too broken up about being shut out for American Hustle. He had a drink in hand and regaled a large group of people that included Bette Midler.

Cate Blanchett was mobbed wherever she went, stopping every few steps to pose for photos with people she knew, slinging her arm around everyone. She and Sally Hawkins held court in one corner of the ballroom. Blanchett’s dress was gorgeous, but she had to hitch it up high to walk, and a trip to the ladies room was a production—it made a sound like poker chips clicking together whenever she moved. We ended up leaving together. She was deep in convo with her husband Andrew Upton and glided past me as I stopped to visit one of my pals at Longshot Coffee (the red-carpet baristas) for a shot of caffeine. Awards season can’t be over! I’ve finally learned how to spell “McConaughey.”