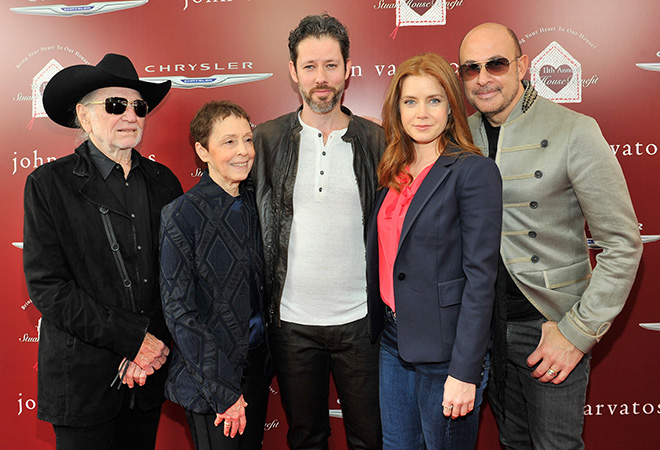 “This is an important event. I’m happy to contribute. This hits near and dear to my heart and now I got my tube socks!” LL Cool J said at the John Varvatos Stuart House Benefit after placing the winning bid on a guitar signed by the Red Hot Chili Peppers (it also included a pair of their infamous tube socks—questionably NSFW).

Cool J got into the philanthropic spirit along with host Amy Adams, who donated $10,000 to the org, a branch of UCLA’s Rape Treatment Center that serves sexually abused children. In the end, the street fair raised $939,000 and director Gail Abarbanel made a grand announcement. “This is a landmark year,” she said. “In a few weeks we are breaking ground on a new building. It will double our capacity and it will also help us provide training for first responders.”

Willie Nelson and his two boys hit the stage starting out with the tune “Whiskey River” to hoots from the crowd. “Got my sons up here pickin’ with us,” Nelson said between tunes. I think I passed Nelson’s tour bus on the way back to my ride. At least, I think it was Nelson’s, judging by the rather pungent smell wafting from it.

Hasbro set up their games for the kids on one part of Melrose, In & Out Burger served up cheeseburgers, and SuperCool Creamery whipped up some nitrogen ice creams. Varvatos’ four-year-old daughter even hit the stage to tell a few jokes. “Ya gotta be four,” comedian Bill Bellamy said of the sweet punchlines. “She’s killin’ it if you’re four.” Adams summed up the event, saying, “It’s really easy to turn away from this issue. The work Stuart House does is impressive.”