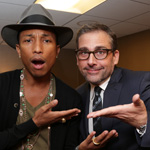 “I am here to pay tribute to Chris out of an intense fear of professional retribution,” Steve Carrell joked about honoree Chris Meledandri (CEO of Illumination Entertainment) before saying a few nice things about the fella that brought us Despicable Me at last night’s benefit for The Fulfillment Fund. Longtime supporter Sidney Poitier was also saluted by the org. “I’ve been appearing here for many, many years and I shall be here another 40 years, God willing,” Poitier said. New Garcetti Film Czar, former Academy president, and all around muckity Tom Sherak worked his usual magic for the Fund, which was founded by Cherna and Dr. Gary Gitnick. Sherak has successfully pried loads of money out of people’s hands at this thing for 19 years. So much dough, in fact (the tally reached $1.6 mil last night) that Ed Helms marveled of Sherak, “He’s my new agent.” Aurora Capital Group’s Josh Klienfelter also accepted kuddos.

At one point I saw Pharrell’s fedora slicing through the crowd as he walk/crouched (to not block anyone’s view of the stage) backstage. He then performed with the Hamilton High School Choir and got the suits up on their feet with Blurred Lines (T.I. joined him onstage). At the auction, Sherak worked the audience for donations and even took pledges on his phone (Judd Apatow phoned in $15,000). Dave Grohl used his auction paddle and bid $7,000 for lunch with Miranda Cosgrove at Spago. Allison Janney modeled a Martin Katz diamond necklace, producing the box from her purse and taking a snap with the winning bidder. Then Fulfillment Fund grad student Jahvry Bailous got up to tell his story about how the Fund had his back. I sat by Bailous at dinner and for a fella addressing that many power-brokers he wasn’t too nervous. Some final words from Pharrell, “When I was your age, we depended on luck. But with organizations like this, you don’t need luck.”