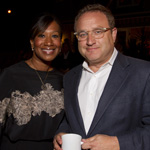 Jon Glickman (MGM) and Christy Callahan opened their Hancock Park home this week for a Foreign Policy Roundtable / US Global Leadership Council soiree. CNN’s Miguel Marquez led a discussion with General George Casey Jr. (Four Star Amy General, Chief of Staff, US Army 2007-11 and Commanding General, Multi National Force – Iraq from 2004-07) that was so interesting it was off-the-record. Marguez kicked off the discussion saying, “Several years ago I would have swam across the Tigres River to sit next to you like this.” The General glanced at the water behind them and replied, “The pool will have to do.” US Global Leadership Council peeps Hon. Dan Glickman, Chair and Elizabeth Schrayer, Director even gave up their slots so the General could take more questions from the Hollywood-heavy guests. Who else did I spy schmoozing before and after the chat? Lawrence Bender (producer), Toby Emmerich (producer), Ambassador Nicole Avant, Wendy Greuel (former Controller and Mayoral Candidate), Sharon Waxman (The Wrap), Ruth Vitale (producer), David Kissinger (Conaco Productions), Rob Eshman (Jewish Journal) and Gary Barber (Chairman, CEO MGM).

It was an enlightening evening. Donna Bojarsky’s (Director) Foreign Policy Roundtable is a series of salons (invite only) for leaders in the entertainment and media industries to more deeply engage with national leaders and policymakers.