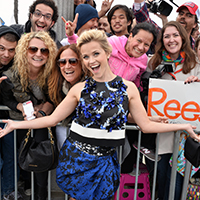 Well, there was water, water everywhere at the Film Independent Spirit Awards. It came from the sky, squished underfoot inside the beachside tent, and it decorated the tables—Fiji water in those fancy square silver decanter thingies. Here’s what I picked up hopping between the show tent and the interview tent with my umbrella:

Once again, John Waters was the best dressed gent in the room. You could find him sitting at his usual table (front and center) by the stage. He is always plaid to be alive.

Brad Pitt and Angelina Jolie caused a stir wherever they went. They had to separate (Pitt won as a producer for 12 Years A Slave), and that seemed to give partiers the go-ahead to grab pics with Angie as she tried to leave the tent. She was mobbed, finally exiting out a side flap. Backstage, Pitt said quite a bit about the movie (which picked up a lot of hardware, including Best Feature): “The cold reality is this is difficult material to be made. The risk was me being a distraction in a film like this.”

There were a lot of Saturday Night Live alums in the crowd. I watched them all come through the tent flap and started a tally: Bill Hader, Andy Samberg, Will Forte and Fred Armisen. When L.A. gets 13-time SNL host Alec Baldwin soon (he’s threatened to move here) we will be overrun.

Cate Blanchett got up to introduce an In Memoriam tribute to James Gandolfini, Roger Ebert and Philip Seymour Hoffman. The cold, rainy weather would have been perfect for Hoffman’s usual garb—a brown sweater.

The Lupita Nyong’o lovefest continues as she won for her role in 12 Years A Slave. When a journo asked her if she learned anything playing the role she replied, “The one thing I’ve taken away as a lesson is to be present. And I think it’s the one thing that has gotten me through this crazy period of time.”