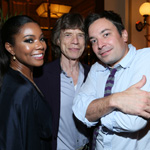 Mick Jagger and Jimmy Fallon are in town. Must be Emmy time? There were two super fun bashes Friday night. CAA threw their annual party before the party at Bouchon. Chef Thomas Keller fed party-goers like Lorne Michaels, Mick Jagger, Sofia Vergara, Eva Langoria, Chris Paul and Jennifer Lopez and others (they were swigging Ketel One). Over the course of the night, Fallon whipped out his phone to show Jagger and the whole party pictures of his new baby. Over at Fig & Olive, Entertainment Weekly’s annual pre-Emmy soiree is so packed the tip sheet is two pages long! Big Bang’s Kaley Cuoco was the first to arrive only to be followed by cast mates Johnny Galecki and Kunal Nayyar. Modern Family’s Eric Stonestreet popped across the street to take pics and sign autographs with fans who had lined up to looky-loo. Also at the party? Laura Prepon, Scott Bakula, Tony Goldwyn, Harry Hamlin, Jesse Tyler Ferguson and Julie Bowen (among MANY others). L’Oreal goodies on the way out. And Emmy host Neil Patrick Harris hit both parties, he’d better pace himself or he’s going to poop out on Sunday night.

Will Any of the Hollywood Agencies Touch Trump?