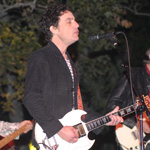 Once again producer Mike Fleiss (Bachelor creator) opened his ample front yard for the Boys & Girls Club of Malibu benefit. This year it was at his sprawling new compound (formerly Mel Gibson’s pad) and it was properly decked out with twinkly lights and a comfy stuff from Malibu Market Design (up for bid – brilliant idea). There were drinks and hangover cures (seriously, someone was hawking one) and HUGE honey calcites (big pretty rocks) on the tables that you could also bid on for the kids. The neighbors all showed up: hosts Keely and Pierce Brosnan, Cindy Crawford and Rande Gerber, Rory Kennedy and Mark Bailey, among others. Julia Roberts and Danny Moder snuck in on the q.t. and when Jakob Dylan hit the stage they were out of their seats and dancing like they were in junior high (earlier at dinner they were eating off each other’s forks).

“I got the memo, I put my keys in the bowl when I got here,” Dylan said with a smile when he saw all the familiar faces dancing below him. It was a casual and lighthearted affair for a cause close to actor Daniel Stern’s heart. He and his wife Laure started the club years ago. They celebrated their 35th wedding anniversary at the bash. I’ve heard Kasey Earnest (Chief Professional Officer) of the teen center say in at past events, “If you live here, give here.” And that’s exactly what big hearted folks like Fred Segal and John Paul DeJoria did.