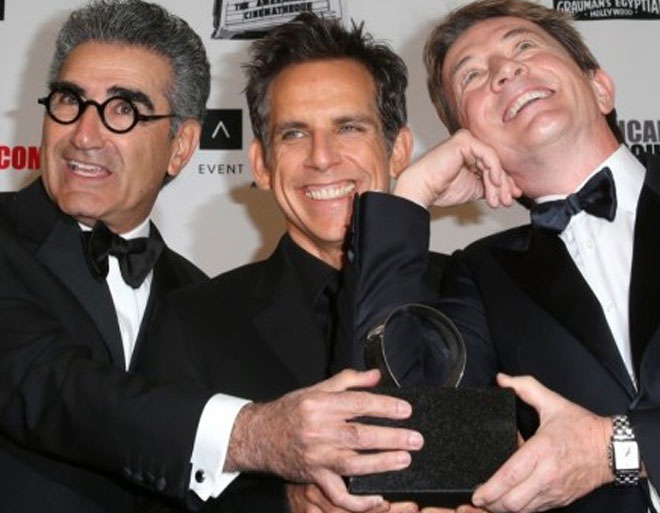 I may smile every time I encounter Ben Stiller (*see schmuck), but I really did enjoy watching his colleagues get up to praise the actor’s fitness regimen and film/TV work as the American Cinematheque honored him. I always like the org’s annual fund-raising dinner. For the past few years it hasn’t been televised, so celebs feel free to throw in some real zingers. Actually, I’ve noticed this trend at a lot of events in the past few years. It used to just be Mickey Rourke swearing a blue streak at the Indie Spirit Awards, but now it’s a raunch-a-palooza at any old thang (*see ELLE Women in Hollywood). Is blue the new black?

Notably absent: Owen Wilson, who made an appearance in a hilarious homemade film (also starring Tom Cruise and Robert Downey Jr.) created by Stiller pal/collaborator Justin Theroux—who broke a world record with the number of times he dramatically used the word “cin-e-ma.” Ex-Prez Bill Clinton offered another chuckle-worthy moment when, in a video message, he mispronounced the org’s name as “Cinay-ma-teak.” Hey, it is an odd word. There were a lot of clip packages, but then there’s a lot of Stiller’s work. Some PG-13 highlights:

Patton Oswalt (first up): “He [Stiller] is ridiculously fit. He must be bathing in the blood of drifters.”

Andy Dick (he got his start on The Ben Stiller Show, oddly didn’t want to get off the stage): “Ben Stiller gave me everything that for the next 20 years I f*#!ed up…. Oh God, this is getting sad for me.”  (nervous laughter)

Jack Black: “I just did one of these for you. F*#k this. Next time you get up and tell everyone how special I am.”

Will Ferrell (presented an homage to Stiller’s private parts, so pretty much the only quote I can use is): “Thank you for Dr. Patrickbigshot.”

Laura Dern (the two played together as kids, their parents are pals): “He’s the first person who calls and writes when he sees his friend’s work.”

William Shatner (via video): “I knew your mother really well. Has anyone ever done a DNA of Ben? He’s got my musculature.”

Martin Short and Eugene Levy (love them!), who presented Stiller with his award:

Eugene Levy: “As General Petraeus said to Paula Broadstone, ‘It’s time for me to give it to you.’”

Stiller topped them all: “It’s nice to get an award for nothing specific.” He also noted that the award still had last year’s winner’s name on it: Robert Downey Jr.