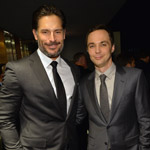 Store Openings: Ermenegildo Zegna three level ode to good-looking manliness on Rodeo Drive was hosted by Gildo Zegna and Stefano Pilati. Everyone was impeccably dressed and the music they were spinning was very chic. The brand’s runway show played on a huge column on the second floor and they unveiled a new couture line. This was only part I of the celebration.

Celebs In Italian Suits: Gerard Butler, Edward Norton, Jim Parsons, Joe Jonas, Joe Manganiello, and Jeremy Renner all stopped by in suits cut just so. There wasn’t an ill-fitting jacket in the house. Butler looked so good in his ensemble that—if we’re not mistaken—he got Sharon Stone’s phone number (what was she writing on that little piece of paper on his back?).

JF Chen: If you get invited to a soiree at Joel Chen’s space on Highland (part II of the party) you go. I have NEVER been to a less than stellar ‘do there yet. The designer’s warehouse always has very forgiving lighting and draws interesting people and parties from art/porn to gorgeous sculpture. The last one I attended was a collaboration with MOCA and James Frano. Zegna and designer Stefano Pilati also unveiled the label’s new ad campaign at this bash. Pilati explained all as a news anchor for “EZ News” on a flatscreen in the gallery.

Lucques Catering: Lucques is, as they say, the bomb. There were castelvetrano olives and olive oil drenched almonds on mid-century tables and lovely things on crostini going ‘round. Tables were set up with risotto, pastas, chicken, polenta and salads. The butterscotch pudding? It deserves its own holiday.