Home Uncategorized Some Firsts At The Critics’ Choice Awards 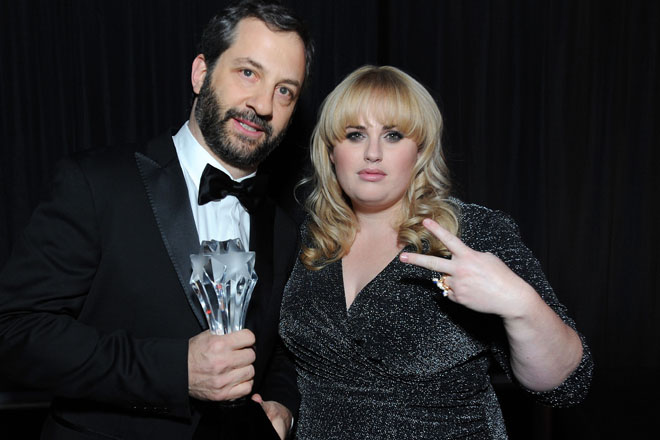 “They’ve spelled my name wrong,” Anne Hathaway announced onstage at The Critics’ Choice Awards as she took the stage to accept her Best Supporting Actress award, the only nod Les Miserables took home. “It’s probably in bad taste to point it out here. It’s gauche.” Adding insult to injury, right before she accepted her award a critic in a video mentioned how excruciating it was to sit through Princess Diaries II. Real nice. Barker Hanger was chilly and Naomi Watts put a wrap over her shoulders. She chucked it, pulled her dress up in a little heave in anticipation of a long walk to the stage only to be denied by Jessica Chastain who made the walk instead for Best Actress. “This is the first time I’ve ever talked at one of these things and it is awesome!” she said.

It is always an extremely interesting dinner, some sort of odd meat. You know it’s going to be a loo-loo when they feel the need to write “bread and butter” on the menu. But it is an exciting room/hanger filled with everyone from Robert Deniro to Daniel Day Lewis to Jennifer Lawrence to George Clooney to Steven Spielberg. Christian Bale was seated next to Mathew McConaughey who showed Batman his back most of the night. What on earth to the most easy going man in the world have in common with the most wound up one? Heeeey. George Clooney was seated next to Harvey Weinstein and Ben Affleck and in one of the terrific moments of the evening Affleck won for Best Director. He had just been snubbed by the Academy that morning. “I would like to thank the Academy,” were the first words out of his mouth. He got a standing o. Argo went on to win Best Picture and a big hug from nearby pal Bradley Cooper.

Some other firsts: an announcer came on to tell folks to “extend” their speeches as the show was running short. I know. I know. In the 16 years I have been doing this, this has NEVER happened. As we were at the airport, I looked up to see if pigs were flying. They then gave away awards during commercial breaks on their too short awards show which was weird. Judd Apatow got up and extended his remarks belittling folks he beat out for the Genius Award (yea, it’s called that) and went after Daniel Day Lewis, “I beat you too. I know you look just like Lincoln. Even sounded like him. But really, how do we know what he really sounded like. You may not have even been close.” Lewis went on to win Best Actor.

At the afterparty, which kind of resembled a prison yard—folks mingling on the concrete below and cops monitoring the action from rafters above. The only person who truly knew how to celebrate correctly was 9-year-old Quvenzhane Wallis who won Best Young Actress and is up for Best Actress at the Oscars. She hit the dance floor with some fantastic moves to If I Was Your Boyfriend and danced all night in her pink dress. John Hawkes two-fisted tuna tartar (did I mention dinner?), and Tom Hooper looked a bit blue (I think he saw a preview of the award season to come – only Hathaway). All in all, a strange, fun, exciting night full of surprises. Tux time again on Sunday for the Golden Globes!