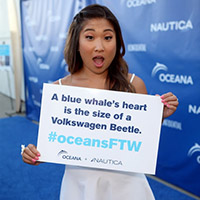 Nautica teamed up with the org again this year, giving out great beach totes and towels as guests left (all of whom were asked not to crash the neighboring wedding). The Bumbys (masked performance artists who tap out fashion-centric notes on typewriters) were on hand as well, offering guests “A Fair and Honest Appraisal of Your Appearance.” Fun idea. I, however, slipped past them into the night—and I didn’t crash the wedding.