Home Celebrity Seth MacFarlane Sits in with the Band 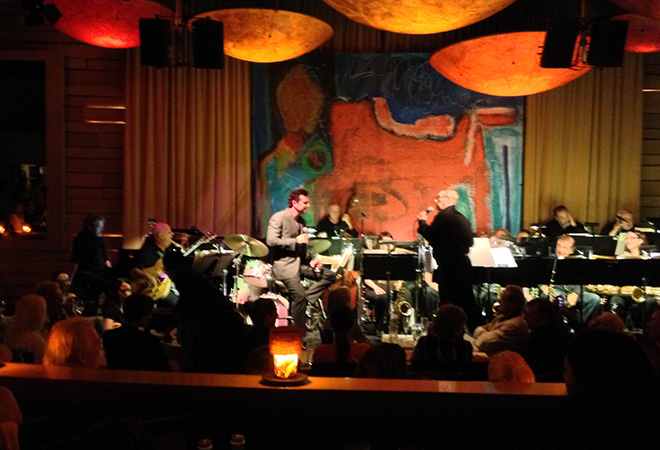 If you popped by Herb Alpert’s Vibrato Jazz Grill last night you caught a terrific show. The stage was bursting with musicians as the Ron Jones’ Influence Jazz Orchestra, led by the vet film/TV composer Jones (who scored Family Guy among many, many others) played with some of the best session musicians in L.A.

I love Vibrato. It is a great jazz hideaway (Herb Alpert!) on Bev Glen before you hit Mulholland. I always think it looks like a ski lodge inside. You can always catch someone fun there—John Tesh and Michael Nouri popped in for two seconds: “It looks like Sinatra is singing here tonight!” Nouri noted looking at all the musicians onstage. Any night you can catch a fab band or singer and they have a new bartender—Greg Debolt (formerly the Library Bar at the Roosevelt Hotel) and new bar menu/bites. But last night, it was all about Seth MacFarlane.

Jones and the band took a break, then the Family Guy creator and cowriter/star of the new film A Million Ways to Die in the West (drink in hand) joined them. “They rehearse, I rehearse and then we put the key in the roller skate and see if it fits,” MacFarlane said before launching into a few Johnny Mercer tunes.

A Million Ways to Die in the West opened last week, and MacFarlane’s costar Charlize Theron was there enjoying the tunes with boyfriend Sean Penn (caught ‘em snuggling a few times). Theron got up to jokingly lead the orchestra on one tune. My fave part? MacFarlane sang One For My Baby as Family Guy characters, Kermit the Frog, and threw in a Michael J. Fox/Marty McFly impression before hitting the last note.