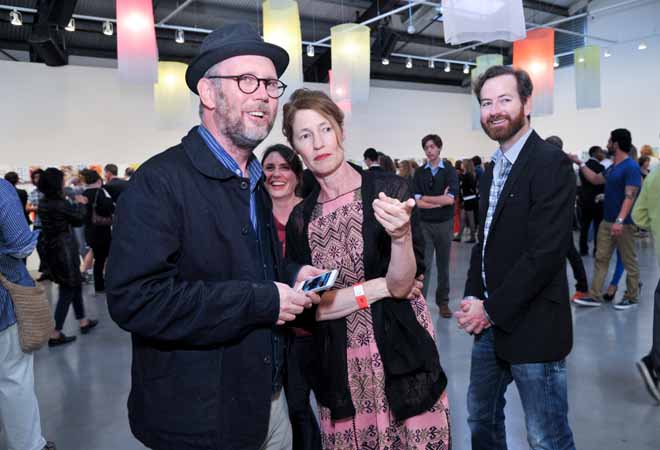 I said it once and I’ll say it again: Best idea for a fundraiser…ever.

At 7 p.m. on Saturday, a bell sounded and folks tore into Santa Monica Museum of Art’s INCOGNITO art sale (no one skidded out on the cement floor this year–last year a gent accidentally knocked a lady over in his zeal to get to the art). Over 700 pieces, each signed on the back, hung on the walls, but patrons didn’t know what they’d be taking home until they paid up. Folks who tried to touch the art had big security fellas talk them out of it, and most pieces were gone within the first hour.

There were some big names on the walls: John Baldessari, Ed Ruscha, Mary Kelly, Ed Moses, Raymond Pettibon, Mark Bradford and Jennifer Steinkamp (among others), which buyers snapped up for $350. Who ran in to get a deal? Director Valerie Faris (Little Miss Sunshine) was one of the first to run in, only to miss the piece she was going for by this much. Oh the agony of defeat. Simon Baker went about his search with wife Rebecca Rigg at a leisurely pace. Faces beamed when they got the piece they were going after, and they smiled all the way to the cash register and beyond. Brilliant.