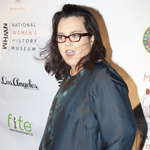 “We’re here for the National Women’s Foundation of Museum … um … Helpers…” Rosie O’Donnell joked on the 12th Floor of Mr. C’s Hotel. We’d actually gathered to support the National Women’s History Museum and NWHM president Joan Bradley Wages’s goal of building a museum in D.C. O’Donnell stole the show (busting into a fifteen minute stand-up routine) while introducing pal Fran Drescher, who received an award. O’Donnell looks amazing. “Yea, I look great,” she agreed, “I had a heart attack.” She took a fun swipe or two at fellow honoree Rita Moreno, too. “Remember nanas at 80 dripping urine?” O’Donnell cried. “She’s in an f—ing unitard here!” Moreno looked fantastic (at 81!) as well. It was an evening that is still making me smile (Los Angeles magazine was a sponsor). As the drinks flowed, “I’ve already had three glasses of champagne,” Moreno said. “One glass and I can barely read. Two glasses and I belong to anybody.” Other attendees included six-time Olympic medalist/swimmer Rebecca Soni (she accepted an award for Girl Up), Devious Maids actress Rebecca Wisocky and Ana Ortiz (“Devious Maids and Orange Is the New Black are the best shows for women,” O’Donnell gushed), and legendary soap actress Susan Lucci.

Fran Drescher Gets Real in the First Episode of Our New Podcast, ‘The Originals’