Home Uncategorized Rolling In the Deep 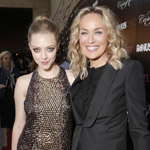 There were two movie premieres the other night on Hollywood Blvd. One was Disney’s animated flick Planes. The other? Millennium Films/Radius TWC’s Lovelace, a biopic of 70’s adult film superstar Linda Lovelace. One guess (two syllables) as to which one I attended. I arrived at the Egyptian Theatre as Chris Noth hit the red carpet—he’s in the pic as a mobbed up heavy who invests in the adult film Deep Throat, one of the first adult films to go mainstream and which has perhaps grossed $600 million to date (its star Lovelace [born Linda Susan Boreman] made $1250). He was followed by Amanda Seyfried—wearing a short, glittery Gucci number—she portrays Lovelace in all her abused/finds redemption glory. Some of Boreman’s family were also in attendance. A no show? Peter Sarsgaard (damn) who plays Lovelace’s abusive husband Chuck Traynor. Castmates Sharon Stone (unrecognizable as Lovelace’s mother) and Adam Brody (spot on as adult film star Harry Reems) also popped by. After the bows, a short walk to a packed bash at No Vacancy @ Hotel Juniper where there plenty of guards watching over sponsor Casa Reale’s jewels and not nearly enough bartenders.