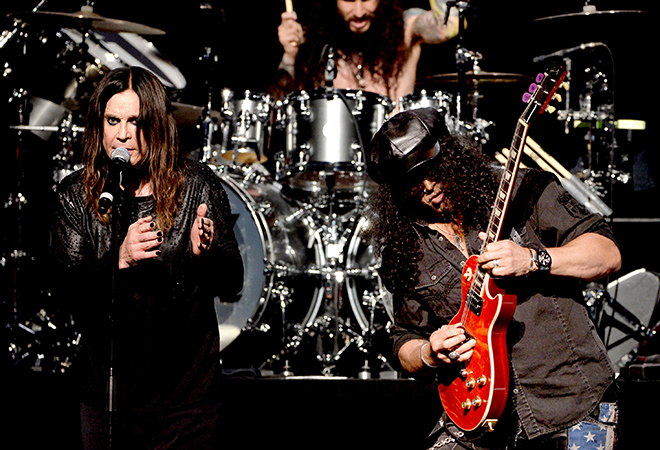 Indefatigable heavy-metal icon Ozzy Osbourne was honored last night at Club Nokia at a MusiCares MAP Fund 10th anniversary benefit concert. The recent Grammy-winning member of Black Sabbath received the Stevie Ray Vaughan award for his dedication to helping other musicians and music-industry pros dealing with addiction. Joe Walsh joked about his and Osbourne’s dissolute pasts, explaining that when the two tried to recall how long they had known one another, “Neither of us could remember . . . anything.” After a couple of songs from contemporary bluesman Keb’ Mo’ and a touching comedic testimonial from talk-show host and comedian Craig Ferguson, himself a recovering alcoholic, Jeff Greenberg, owner of Village Studios in West L.A., received the MAP Fund’s From The Heart award.

The event began with a video remembrance—a trailer for Kevin Kerslake’s documentary—of Adam Goldstein, also known as DJ AM, who died at age 36 of a drug overdose in 2009. Actor and comedian Dax Shepard was a low-key yet spirited host between acts. Singer Beth Hart, joined by Red Hot Chili Peppers drummer Chad Smith, was the first to celebrate Osbourne’s oeuvre with her soulful Joplin-esque spin on the song “Changes.” After covers of Rare Earth’s “I Just Want to Celebrate,” Deep Purple’s “When a Blind Man Cries,” and the Beatles’ “In My Life,” Metallica paid tribute to the evening’s guest of honor with their rendition of his “Diary of a Madman,” complete with James Hetfield imitating Ozzy’s maniacal laugh.

The evening concluded with the appearance of the great and powerful Ozz. Keeping his remarks extremely brief, he showcased his gratitude and energy by performing five of his best-known songs. Accompanied by an all-star band featuring Blasko, Tommy Clufetos, Dave Navarro, and Billy Morrison, Osbourne opened with “I Don’t Know” (whose title made for a brief “Who’s On First”-like moment of set-list verification) and roared through “Suicide Solution,” “Iron Man,” and “Crazy Train.” Osbourne invited the guitarist Slash to join him on stage and they closed out the festivities with the galvanic Sabbath classic “Paranoid.”