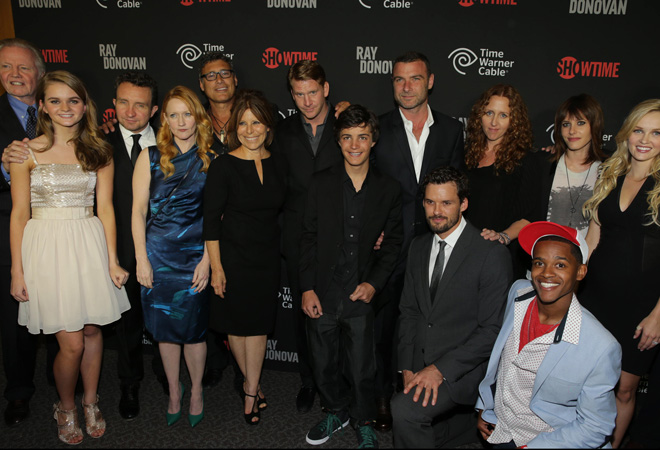 I walked into the Time Warner Cable / Showtime premier of Ray Donovan at the DGA this week with zero expectations other than that it might be good because I liked Liev Schreiber (who plays the show’s namesake — a Hollywood fixer). After spilling a few things on my shirt (note to future-self: avoid dripping canapés) at pre-screening nibbles, I snuck into the theatre with Jon Voight and Elliott Gould (both wonderful in the show).

I walked out swearing under my breath.

Now there’s another show I’m going to have to watch. It’s good—you can’t take your eyes off Schreiber and Jon Voight when they are on-screen. Watching Voight dancing (in just a towel) after getting out of the slammer? It’s a sight to behold. And Scarface fans, Steven Bauer’s in this thing, too. I want to know what is going to happen to the Donovans already. It’s good enough that I’ll probably watch the first episode again when it prems on Sunday. Showtime is also showing the first episode free on their website.

Ann Biderman, the show’s executive producer, creator and writer, sat ahead of me, and everyone from David Nevin (Showtime’s Prez of Entertainment) to Schreiber thanked the scribe (who also created/penned Southland and the screenplay for a movie I watch every time it’s on—Smilla’s Sense Of Snow). A decadent after-do at the SoHo House followed. I continued to Forrest Gump it (“All the Dr. Pepper I could drink”) there, spilling something else on my goner of a shirt, and ran into Rande Gerber and Cindy Crawford. Turns out we were drinking Gerber’s (and partner George Clooney’s) Casamigos Tequila. I’ll be seeing Crawford again tonight at the Helmut Newton exhibit opening. I foresee another summer spent with the Crawford/Gerber on the social circuit. I spent so much time with them last summer—I was glad they didn’t hire someone like Ray Donovan to “take care of” me.