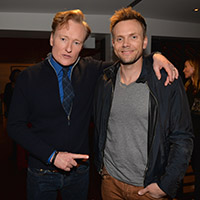 “We’ll be well-behaved, even though we know the owner is away,” Lionsgate Vice Chairman Michael Burns said on the roof of J.J. Abrams’ ultra cool Bad Robot offices. Abrams was absent (away working on Star Wars), but I spotted his wife Katie McGrath amongst the happy partiers at the Oscar Wilde: Irish in Film bash put on by the US-Ireland Alliance. The honorees? Conan O’Brien and YouTube Founder Chad Hurley. Both geniuses, but neither has ever been in a film. Who cares? It was a TERRIFIC to-do, and as Joel McHale said, “This is the nicest event I have ever been to this close to Olympic Blvd.”

The evening kicked off with a tribute to Phillip Seymour Hoffman, who many attendees knew. Folks like actress Sarah Bolger, Philomena Lee (who the movie Philomena is based on), Dana Delany, producers Suzanne Todd and Pat Crowley, HBO Film prez Len Amato, Fox Entertainment Chairman Kevin Reilly and many more stopped by. Irish band The Strypes (stylish fellas) played into the night.

There was Guinness, there was Baileys, there was Bushmills, and there were excellent eats by Irish-owned Kensington Caterers (who else?). But it was O’Brien and Hurley who got the crowd laughing and crying. Hurley was introduced by YouTube sensation ShayCarl. “It’s about time Hollywood recognized Irish nerds,” Hurley joked. O’Brien took to the podium and killed before sirens starting wailing below. “This is such an Irish event that cops are coming,” O’Brien joked before adding (sincerely!), “The fact that I can call my mom tonight and say I got this is a big deal.”