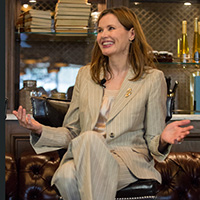 Did you know that in movies and television shows only 17% of crowd scenes are made up of women? I learned that and other interesting facts in Mount St. Mary’s 2014 Report on the Status of Women and Girls in California at Los Angeles magazine’s most recent Breakfast Conversation. The last convo was with Mayor Eric Garcetti and this go-round found First Lady of L.A. Amy Elaine Wakeland, Mount St. Mary’s College Prez Dr. Ann McElaney-Johnson, and actress Geena Davis (who is also founder of the Geena Davis Institute on Gender in Media and chair, California Commission on the Status of Women and Girls) chatting with our editor-in-chief, Mary Melton.

Ladies and a handful of gents (Councilman Tom LaBonge, most notably—that man had a lot of energy so early in the day!) sat, stood, and breakfasted at Public Kitchen & Bar while listening and then asking questions of the panelists in the packed restaurant. “I want to change what kids see from a very early age,” Davis said, “If I lean over to my daughter now when we’re watching something, she knows enough to say, ‘I know—there aren’t enough girls in this.’” Who did I spy having French toast and granola parfaits in the early morning hours? All the members of the City of Los Angeles Commission on the Status of Women: Erma Bernard-Gibson, Aracelia Campos, Dallas Fowler, Nikkie Mark, Rebecca Ninburg, Farrah Parker, Jessica Postigo, Janine Sides, and Ceri Zamora. Also in the house: Shoe guru Calleen Cordero, KCRW’s Jennifer Ferro, and the Mayor’s chief of staff, Ana Guerrero. Check out the pictures!