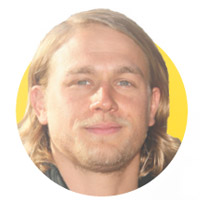 Charlie Hunnam
Claimed to be too tied up to tie up Dakota Johnson in Fifty Shades. Frank Gehry
He celebrated Disney Hall’s tenth anniversary by thumbing his nose at critics during the L.A. Phil gala.