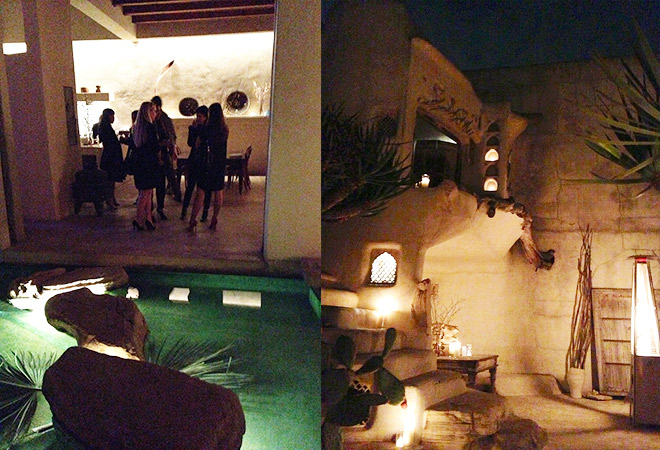 I’ve covered parties in homes with bowling alleys, ballrooms and movie theaters in them. One Malibu estate included an indoor pool in a room entirely made out of sea shells, while another manse had artwork made out of some viscous material that made you desperately want to stick your finger in it. The piece even came with a person positioned next to it whose job it was to ask you to please NOT poke it. That being said, my mouth hung open a little bit checking out photographers Phillip Dixon and Veronique Vial’s Moroccan-inspired home in Venice this week. It provided a gorgeous space for Barney’s New York and jewelry designer Irene Neuwirth to throw a bash for her new beachy-smelling fragrance.

Like most things in Venice, the outside gave hardly any hint to the Fred-Flintstone-in-Marrakech-with-candles vibe going on inside. There was a river separating the living room from the kitchen and I kept hopping over rocks to get to chef Jon Shook (Animal Restaurant, Son Of A Gun), who sent out tasty tidbits like lobster rolls and caramel s’mores from the kitchen. The more you had to drink the trickier the rock hopping became, and I didn’t see the slim hallway behind the water (where you didn’t have to traverse the river) until about two hours in.

A band played in the home’s courtyard, fireplaces blazed, and another terrible idea was wobbling up narrow boulder steps to a cave-like bedroom for a better view of the surroundings entirely made of cement (made to look like stone), trees, water and wood-beamed ceilings (the parts of the home that even had ceilings). Lots of fashion folk in attendance telling Neuwirth she smelled terrific. She did. I spied: Cameron Silver, Liz Goldwyn, Kendall Conrad, Woju Kim, Shiva Rose, Constance Zimmer, and Busy Phillips.

This Corner in East Hollywood Is Secretly One of L.A.’s Hippest Micro-Hoods