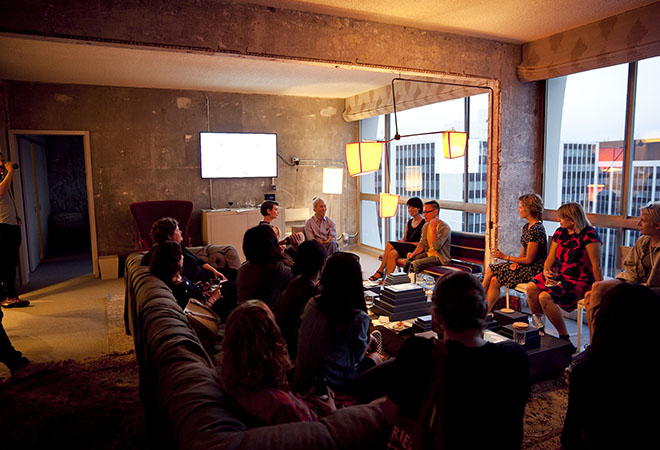 When an invite came my way for a Nordstrom/Poketo event at The Line Hotel, I thought, Neat! Two great stores and one super cool hotel! Two birds, one Sean Knibb-designed stone! And the event was, in fact, neat.

The ‘do (part of the “Here” series put on by The Line) turned into a love-fest between the “art for your everyday” Poketo founders Ted Vadakan and Angie Myung and their new collaborator Olivia Kim, the Director of Creative Projects for Nordstrom. Their Pop-In @ Nordstrom: Welcomes Poketo is currently online and in eight Nordstrom stores around the U.S.

At one point at the cocktail party we all went around the room and said our names and occupations. The refreshing little bash was filled with artists and designers featured in the shop (Poketo has a boutique in The Line and a flagship Downtown) and was full of so much creative energy it could have powered the lights in K-town for a few hours if only one could have plugged into it.

“The minute I get into a city, I drop my stuff in a hotel and hit the pavement,” Kim said (she is based out of Seattle). “It’s funny where you find inspiration. In L.A., the car game is sick. People here have amazing cars and people look really good in them.”

The thank you’s continued, and after a last bite of cheese I wandered around the new hotel. The aforementioned Knibb interiors are fresh, and Roy Choi’s POT and the Pot Lobby Bar and cafe are definitely places to check out. A staffer told me The Commissary (next to the pool) will be open shortly. The whole place is inspired.