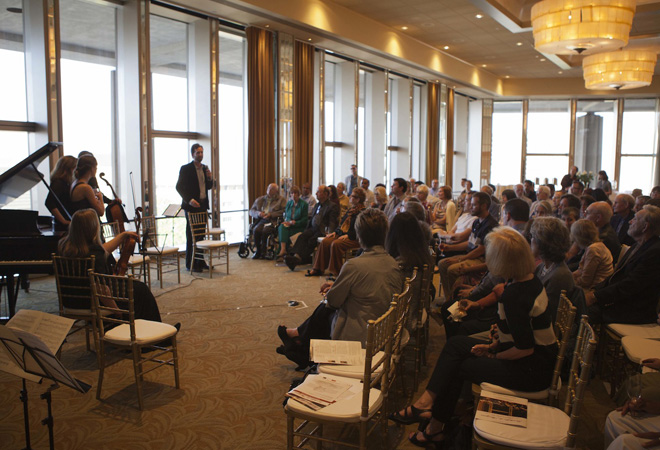 I stopped by the last of this season’s Le Salon De Musiques concerts the other night. They were playing/singing Brahms and Mahler. These to-dos are always held on Sunday afternoons on the 5th floor of the Dorothy Chandler Pavilion—a smaller space where you can hear, see and become part of the music. The concerts were founded by artistic director Francois Chouchan and puts them on with co-artistic director John Walz. Did I mention there are finger sandwiches and petite desserts afterward? Well, there are.

This go-round I sat near a little guy about ten-years-old (maybe younger). This is not the norm, you usually don’t see children at these things and I braced myself for a squirm-fest. Not only did the tot not wiggle, he asked the musicians some really good questions afterwards. What did I learn? Don’t underestimate kids and that Brahms was a pretty stand-up guy (well, he may have had a thing for Schumann’s wife). The music was otherworldly. It’s an amazing away to listen and understand music—and the view behind the musicians of Los Angeles doesn’t hurt either. Here’s the scoop on the new season which starts up again on October 6th. Check out a concert or two (or the whole series) before it fills up.