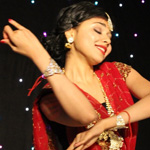 The call sheet said sixish for red carpet arrivals but the Miss India America pageant (put on by SpiritofIndia.com) started around nine, not that there wasn’t plenty to keep you occupied in the crowded lobby of Marriot Rennaisance hotel until the ladies (and it turned out gents, too) hit the stage. A packed red carpet buzzed with beautiful people like model Nabilla Benattia, actress Navi Rawat, and singer Anjali Dea. Next to the press area guests could pick up anklets, necklaces, and earrings before having a bite (courtesy delish Spice Hollywood) and there was enough copies of South Asia Magazine scatted about to wallpaper the place.

Someone finally began handing the judges pens and the happy chaos began, but not before the emcee joked about IST, Indian Standard Time. There were gorgeous gowns and singing and dancing, with performances by Anjali Dea and Raghav (sometime after ten) and some terrific people watching. While the ladies walked onstage with numbers pinned to their left hips, someone delivered a big Burger King bag to the judges table (I don’t think it was a bribe) and a call came out over the loud speakers for judges to not judge the talent competition. I was confused but entertained until, four-and-a-half hours in, I began to think I wouldn’t have the stamina to see Miss India America, Mrs. India America, and Mr. India America crowned (I also see there were more titles bestowed, but they are too  numerous to list!). I threw in the towel somewhere towards the end of the talent competition (sorry ladies and gents).

Congrats to Miss India America, Anisha Patel, Mr. India America, James Ralph, and Mrs. India America, Zahra Patel! Like the little girl from a nearby table (pictured at the end of the slideshow), this party girl just couldn’t make it past the six hour mark.