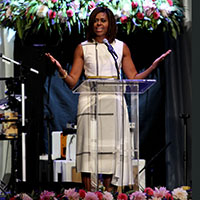 Who is the only person better at speechifying than the President of the United States? It’s the First Lady, Michelle Obama. Mrs. Obama gave the keynote speech at the Grammy Museum’s inaugural Jane Ortner Education Award Luncheon, where El Dorado High School teacher Sunshine Cavalluzzi and singer/songwriter/best dancer ever Janelle Monae received awards for their commitment to music education.

After everyone at Nokia went through security and had lunch, the First Lady and Mayor Garcetti arrived from an event they attended together in Century City (at the Unite for Veterans Summit event, Garcetti pledged to end veteran homeless in L.A. by 2015). The Mayor spoke (did you know he has an upright piano in his office at City Hall?), then teacher Sunshine Cavalluzzi received her award to cheers from her many students in the room. When she picked up her award, Janelle Monae echoed something I’ve been hearing lately from folks like Cate Blanchett and Kerry Washington. It’s a good message: “You don’t have to be perfect.”

Monae continued, “I was also dealing with a parent who was struggling with addiction so it was really difficult for me in high school because I had to study, I wanted to be an artist, and I had to go home and deal with some of these things. Statistics would even say that I shouldn’t even be standing here right now because of my environment – and it’s all because of music and music being my outlet that I stand here before you right now. Music helped me really deal with my emotions. When I couldn’t articulate how frustrated I was feeling I was able to write songs and perform in talent showcases and write short stories – you know it just gave me the opportunity to get it all out.” After Mrs. Obama spoke Monae performed tunes like Jane and James Brown’s I Feel Good.

The speechifier that got the crowd (and herself) really choked up was keynote speaker Mrs. Obama, who said, “When we started inviting performers to the White House, we told everyone that we also expected them to spend some time with young people doing workshops and these wonderful mentoring sessions… I have to tell you these are some of my favorite events at the White House. They are these truly intimate moments when the artists and the kids are sitting around in the state dining room, very special. I make sure they know they are sitting where we host Kings and Queens and leaders from all over the world and in that room they are pouring their hearts out to one another. They get really close. They are not just talking about music, they are talking about their hopes and dreams and fears. They’re talking about the value of hard work, things like staying true to yourself, picking yourself up when you fall. That’s one thing I say to the students, ‘Failure is your only guarantee in life.’ They gotta figure that out. So many of them have had these experiences, [and] they walk away transformed. How can you help but not be transformed with a new sense of purpose and hope.”

Mrs. Obama closed her remarks to the kids in the room with these words: “Take some risks. Don’t be afraid to express yourself. Don’t ever give up no matter what challenges you face. I believe in you. Your President believes in you. Make us proud. Make yourself proud.”