Home Philanthropy Lunch With Mindy Kaling and The Girls 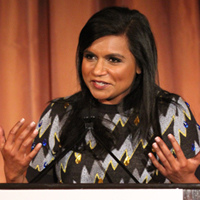 Mindy Kaling is known for bringing the laughs, not tears, but when she accepted an award at Girls Inc.’s 18th annual fund-raising luncheon at the Beverly Hills Hotel last Wednesday, her eyes were wet. “I am basically weeping, and so early in the morning!” said the star.

While the well-heeled crowd that filled the hotel’s Crystal Ballroom munched on salad with vegetables and chicken and wrote out checks to Girls Inc., young alumni from the program spoke about the ways in which the organization helped them realize their dreams. By the end of the event, Kaling wasn’t the only one crying—or screaming, for that matter. Access Hollywood’s Shaun Robinson, who hosted the event, announced the day’s fund-raising total—more than $586,000—with a yelp.

My LA to Z: Michael Nouri