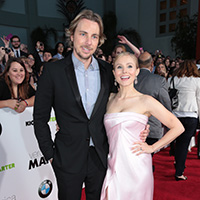 Did you pledge a big chunk of cash on Kickstarter for the Veronica Mars movie (they raised 5.7 mil)? Then you were at the L.A. premiere last night (and the after-party at Sadie Kitchen) in Hollywood. Who walked the rouge carpet into the TCL Chinese Theater? The film’s stars: Kristen Bell (along with other half and castmate Dax Shepard), Jason Dohring, Jerry O’Connell, Dir. Rob Thomas, Ryan Hansen, Percy Daggs III, and Tina Majorino among others! Bell changed out of her pink J. Mendel dress into a black number (but kept the same gorgeous earrings on) for the after-do.

The cast reunites tonight at the same spot (well, behind the TCL Chinese Theatre at the Dolby Theatre) for the opening night of Paleyfest. Snaps and important info on that tomorrow!