Home Uncategorized KCETLink: In The Kitchen With Thomas Keller 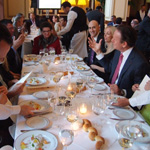 I’m no foodie (I have a can of spray cheese in my cupboard—right now) but I bragged to all my pals that I got a tour of Bouchon’s kitchen by chef/owner Thomas Keller at KCETLink’s first shindig as a bigtime global entity. Think Electronic Company and Morgan Freeman pronouncing the words: “KCET” … “Link” … “KCETlink.” The newly formed media org drew a happy group of supporters who were talked through a menu (signed by Keller, nice touch) that included everything from a zapped summer melon salad to agnolotti. “Think cap gun,” Keller laughed as he explained how he made the delish pasta. For each course the avant guard orchestra MUSE/IQUE played music which coincided with each dish. I will always now think Miles Davis/perfectly prepared eye of rib with artichokes. Nice.

KCETLink Prez and CEO Al Jerome was excited about the recent merger and the night’s theme Local to Global, “We all live in the most global and diverse region in the world,” he said. Recent programs include a program called Borgen which after to listening to folks descriptions, sound like a Danish version of the West Wing. When we were all stuffed, Keller gave everyone a tour of his kitchen which included live feeds to his other restaurant’s kitchens and answered questions. His next venture? Re-doing his famous Napa Valley French Laundry’s kitchen. I stumbled out full and happy. I may have had McDonald’s for lunch the next day…but I’m not proud of it.