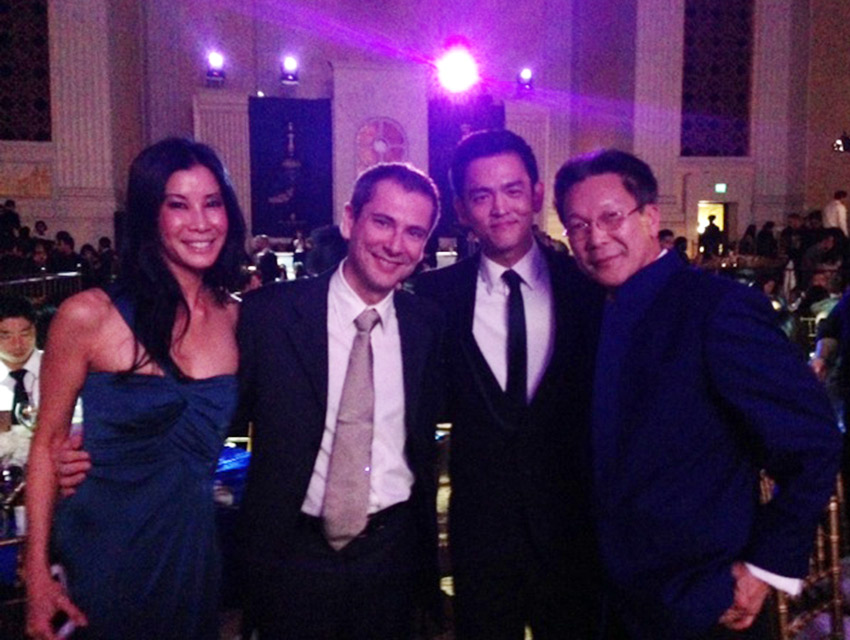 “They always get such great acts every year. I am blown away,” Lisa Ling told me at the super buzzy Unforgettable event presented by KoreAm magazine at the Park Plaza. The place was packed, very warm (ah, these historic buildings), and there was non-stop entertainment between awards at this annual event that honors leaders in the Asian community. The Actress of the Year award went to Ming-Na Wen, who stars in Agents of S.H.I.E.L.D. “I am the only non-Korean receiving an award tonight,” the Chinese-American actress told the crowd. “I hear the Koreans have some really great plastic surgeons. I am going to get some business cards tonight,” she joked.

The man of the hour was definitely Selfie‘s John Cho, even though the aforementioned show was recently cancelled by ABC. “I think there must be some mistake,” he said as he took the stage to accept the Actor of the Year award. “My show was cancelled.” Cho actually gave an extremely heartfelt acceptance speech while his father watched from the audience. He made sure to thank the Korean community for supporting him in his career. “The Korea Times called and wanted to do a small feature on me,” he said. “It wasn’t until then, when my parents read an article in The Korea Times, that I was legitimate.” And Ling was right, the talent onstage was extraordinary. Be sure to check out the incredible Mike Song and KRNFX whenever they dancebox together; they brought the house down.

Royal Salute entered the ballroom with great fanfare delivering bottles of 21-year-old scotch to all of the tables. Cho got up again to accept their Mark of Respect Award. He went on to praise KoreAm as a reader, citing the many of the magazine’s articles by name. Naturally, there was a party after the party. I kissed the scotch like I was taught and still had a bit of a headache the next day. It was worth it.

#StarringJohnCho Takes a Direct Hit at Discrimination Against Asians in Hollywood