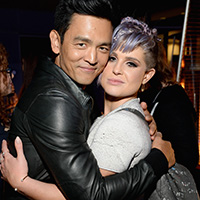 There were two apocalypses, three love triangles, and one mutant bunny in “24 Hour Plays” presented by Montblanc and performed on The Broad Stage. Who decided sleep was for wimps and took part in the whirlwind productions that raise dough for the Urban Arts Partnership? Gavin Rossdale played an actor having trouble with his British accent (funny as he’s…well…English); Wilmer Valderama salsa-ed once again (he performed last year) but this time in a white wig as the ghost of Lawrence Olivier; John Cho and Kelly Osbourne pretended to be having an affair, and Alanis Morissette helped picked a human sacrifice with a rainbow teddy bear before planting a kiss on Ashley Fink. It seems that participating actors get to do one thing they’ve never done onstage and bring one prop with them. There may be a million moving parts to this event, but it’s one of the most creative fund-raisers around.

Then everyone stayed up just a little while longer for a late night party at The Shore Hotel. Thoms hit the dancefloor and I spotted Rossdale chatting with Valderama by the light of the pool. There was a photo booth complete with costumes (hey, it’s the theater) and loads of chocolate chip cookies (Stella Barra – good stuff). I finally gave in around midnight as the festivities raved on. What’s another day without sleep?