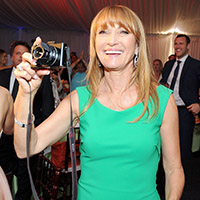 Each year (well, for the last four years anyway) Jane Seymour and James Keach tent the lawn and put caterers on the tennis court of their Malibu beach house for their Open Hearts Foundation shindig.The couple announced they were divorcing last year, but walked the carpet together, took to the podium together and the show just went on amicably. The foundation gives money to other do-gooder orgs and not always the biggest ones on the block, which is what I like about it. This year, dough went to worthy causes like Lauren Parekian-Paul and Molly Thompson from the KIND Campaign. Travis Mills, the retired U.S. Army/quadruple amputee and founder of the Travis Mills Foundation, had the room in tears…from laughter…hilarious guy. Money also went to Kimberly Williams-Paisley (for her work with patients and families dealing with loved ones with dementia) and to Arizona Diamondbacks CEO Derrick Hall (and his Derrick Hall Pro-State Foundation).

Seymour gets terrific music at her house party. Angelica Garcia, Delta Rae and Cheap Trick all rocked the tent with Aaron Paul (wife Lauren got kudos with KIND) joining Cheap Trick (on keyboards) for an encore. The flowers may be fake (Seymour has a silk flower company), but the sentiment is real at this ‘do, and it is the only thing I’ve been to in ages where everyone stays until the last note is strummed and then they stay longer. Keach (who produced Walk The Line) showed a trailer from the documentary he directed on Glen Campbell and the “Goodbye Tour” the singer embarked on when after he told the world he had Alzheimers. Then it was a one block shuttle ride on PCH to the car. Ahhhhh L.A.