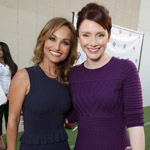 Did you know that celeb-u-chef/entrepreneur Giada De Laurentiis started out as the Howard Family’s (a.k.a Opie and Co.) personal chef? I learned all that and more the other night at Project Angel Food’s Angel Awards, held in the org’s tricked out parking lot (they deliver healthy meals to people with HIV/AIDS, cancer and other life threatening illnesses).

Bryce Dallas Howard popped ‘round to hand De Laurentiis her award and reminisce. “I’d sit around and ask her questions,” she told the crowd. “I was 20 pounds overweight, and I’d ask her, ‘how much do you exercise?’ She was gorgeous and cooler than anyone I’d ever met.”

Long-time Angel Food supporter Jane Lynch also received a pat on the back (side note: how much do you adore Hollywood Game Night?) saying, “I accept this beautiful salad bowl on behalf of all the volunteers.” The award is a big glass bowl with the org’s name and theirs etched into it. I also got to meet Angel Food’s new CEO, Laurie Lang, who puts the go in go-getter. Councilman Tom LaBonge got everyone choked up at the end of the night by reminding guests to “look up at the sky and think of the others that went before us.”